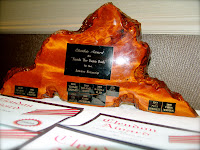 I belong to a fantastic e-loop known as the BI50D's, a sub-loop of RWNZ e-loop. We're a small group of writers who initially started it up to get a book finished in time to enter the RWNZ Clendon Award. One of the things we did recently was to recount what we had achieved over the 12 months.
Sometimes we forget in the struggle to get published the importance of acknowledging and celebrating what steps we have made in our journey.
This year, despite working a full time teaching job, I proudly achieved the following in my "spare" time...
*finished another book
*designed a website
*started a blog site
*gained representation with an agent
*lost representation with an agent (this is a positive as I learnt so much with her)
*finalled & placed with 90% of the entries I put in comp's this year (big achievements here were winning the Valerie Parv Award & Clendon Award, multi-placing in the VPA & Emerald)
*edited 2 books
*started a new book
(only goal I didn't achieve was *attended the RWA awards dinner with Hugh Jackman - and boy, did he miss out on a great night - LOL)
Not a bad list considering. Most of these I achieved because I set goals and made decisions on how to attain them, with, of course, support and encouragement from my fellow BI50D'ers. Can't do it without them :-) .
I've already started on next years goals...(I'm sure the list will grow!)
*enter 4 US romance writing competitions (ie.Golden Heart, the Emily & 2 others)
I also want to:
*find representation by another agent
*finish 3 more books (draft & 1 polished)
*help judge in RWOz writing comp's
So, what goals have you achieved in 2009? And what ones are you setting for 2010?
Posted by Kylie Griffin at 1:00 AM 1 comment:

A Christmas Message to one and all

Remember it's not about rushing around finding the perfect gift or the number of Christmas presents you buy someone, or even the amount of food you set on the table.
Christmas is about the greatest gift given to humankind - the love of God.

I bring to you good news of great joy that will be for all the people.
Today in the town of David a Saviour has been born to you."
(Luke 2:10-11)
It's also about spending time with those you enjoy being with and telling them you love them. I hope Christmas brings you laughter, relaxation and many memories with your family & friends as you enjoy this holiday.
Merry Christmas & God Bless!
Posted by Kylie Griffin at 1:00 AM 1 comment:

When I'm writing,
I know I'm doing the thing I was born to do.
(Anne Sexton)
Posted by Kylie Griffin at 1:00 AM No comments:

Email ThisBlogThis!Share to TwitterShare to FacebookShare to Pinterest
Labels: writing

Ever hit a bare, desolate patch in your life where your creativity seems to have dried up? And the longer you worry about it, the more pressure you put on yourself to spark it, the longer the effect seems to last?

I’ve been through this sort of experience more than a few times. These last couple of times though, I’ve taken closer notice of what’s helped rejuvenate me.

Reading for pleasure – it’s like a super strength bag of fertilizer. This is the biggest pick me up I know that refills my creative well. Relaxing with a good book pulls me away from the desolate desert of worry. The energy, the ideas, the emotions that come with reading another author’s work feeds me and stimulates my mind, de-stressing me while rejuvenating me.

Watching movies – just another version of reading for pleasure.

Writing something every day – even if it’s not the next WIP it keeps the working parts ticking over, the eye in, the skills from getting rusty. It temporarily satisfies the drive to be doing “something” in the writing arena.

What fills your creative well when the levels fall low?
Posted by Kylie Griffin at 12:00 AM 4 comments:

Believe in yourself
and there will come a day
when others will have no choice
but to believe in you.
~ Cynthia Kersey
Posted by Kylie Griffin at 12:00 AM 3 comments:

I have three cats who keep me company...let me rephrase that...My three cats have a human who keeps them company.
Splat, Pandamonium and Furball. Two females and one male (who's a bit of a wuss, but don't mention that to him as he thinks he's the he-man of the house :-) ). There's a picture of each of them on my website.
When I write each of them have their own way of helping me out (or should that read annoy and distract me???).
Furball likes to perch himself on top of the stack of plastic crates near my office desk. From there he supervises all that happens in the office, including watching me write. It's a great pozzie - the split cycle A/C blows right over this spot, so in winter he's warm, in summer he's cool. Smart boy.
He leaps onto my desk from that vantage point and he tends to do that right in the middle of an action scene. It's almost as if the rapid click-clack of my typing has attracted his interest and he's come to see where I'm up to. Most times he just sits beside the lap top and watches the cursor move across the screen and once he's checked out the scene (aka had enough) he returns to his post.
Panda floats through the office, a bit like a black and white ghost, reminding me with her plaintive miaows that a) the food dish is empty, b) it's dinner time, c) she wants to go out - NOW or d) it's time to pay attention to her not the square screen in front of me.
You know she's really serious when she jumps up on the desk, walks in front of the screen and slaps you in your face with her tail. She tends to be the more ambivalent one of the three when it comes to writing. Plot and character come second to all of the above.
Splat is my furry protege. Out of all the felines I've owned she's the one who loves the laptop and shares her ideas on where the story should head. She spends a lot of her time on the office desk - lying beside the keyboard, walking across the keyboard, sitting near the laptop, walking across the keyboard, rubbing her head on the corner of the screen (she's doing that right now), walking in front of the screen (she's also doing that right now), sitting in front of the screen, walking across the keyboard, tapping the screen with a paw, walking across the keyboard...
I think you get the idea.
Some of you might think she's only doing it to get my attention. 5% of the time you might be right but, I'm sure other cat owners will agree when I say she's actually pointing out irrelevant flashback narratives and questioning the plausibility of a character's motives. She's an author's cat, after all!
Don't be surprised if you see me mention my furry friends on the dedication page of one of my books once I publish - they've all lent a helping paw to shape my stories. And I wouldn't have it any other way.

Photo: Furball, & a typical cat-like pose for the camera.
Posted by Kylie Griffin at 12:00 AM 2 comments:

"Ultimately, to be a successful author,
your desire to communicate has to be greater than your fear of rejection."
~ Janet Evanovich
Posted by Kylie Griffin at 12:00 AM No comments:

When I started writing, I did so with the idea of making my heroines as strong as the male characters I'd read in books. There was nothing I loathed more than to have a weak heroine who relied on the hero to save the day or get her out of a tricky situation, or even worse, one who fluttered her hands and shrieked with fear while waiting for someone to save her. Second on the grit-my-teeth-and-grimace-list was no heroine in a good story.
So, when I come across a good book with a kick-ass heroine, where the hero doesn't overpower her as a character (yes, he could be an alpha but not in an overbearing/unbearable way), I usually end up loving the book and the author immediately goes onto my To-But-Without-Hesitation list.
Tracey O'Hara, fellow Aussie author, is now top on that list. I've just finished reading her debut urban fantasy book, Night's Cold Kiss, and really enjoyed it.
Antoinette, the heroine, hates vampires after witnessing the murder of her mother as a child. She's a scarred, vengeful character who transforms (figuratively and literally - no spoilers other than that :-) ) by the end of the story.
I was engrossed by this character and her story. Her strengths and weaknesses were attractive as well as grind-your-teeth frustrating; a balanced, convincing portrayal that made her a very believable character.
What makes Antoinette kick-ass, besides those qualities already mentioned? She's an elite Venator, a highly trained vampire slayer (and no comparison to Buffy should be made here). O'Hara's world is a whole lot darker and believable than Whedon's ever was. The action scenes I absolutely loved - fast paced, easy to read, gripping and realistic.
Not a screaming heroine in sight. Antoinette is a female who knows what she wants and takes it (no Conan or he-man dressed in a skirt in this story) and she knows how to use weapons. O'Hara's knowledge/research is integrated into these scenes and full kudos to her for making this seem effortless.
Tie this in with a strong plot that finishes with a satisfying conclusion, a hot romance, several arcing sub-plots left unresolved that foreshadow more books in this series, and you have a great story.
If you haven't yet read O'Hara's book, and like kick-ass heroines, then get a copy and read it.

The Labour of Writing quote

"Like stones, words are laborious and unforgiving,
and the fitting of them together,
like the fitting of stone,
demands great patience and strength of purpose
and particular skill."
(Edmund Morrison)
Posted by Kylie Griffin at 12:00 AM No comments: