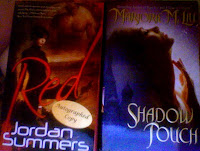 How have you gone reading some of your "keepers" and looking at their opening few paragraphs? Did you analyse what made them appealing? Was it the author's voice? Did they open with riveting dialogue or a fantastic action scene or something usual with an unusual twist?

Here are two more of my favourite openings...

Not many people can handle the pain of being ripped apart, of having your limbs twisted and morphed until you are convinced your mind will shatter into a thousand tiny shards.
I can. And I’m tired of hiding my true nature so that humans can sleep better at night, convinced their actually in control of this tiny blue-brown planet. They need to know the truth-they need to realize that they’re not at the top of the food chain.
Far from it.
An unknown character’s point of view begins this scene in RED by Jordan Summers. The subject matter certainly grabs your attention in the first eleven words, doesn’t it? The second half of the sentence just makes you wince and wonder who this character is. Surely it can’t be the hero or heroine?
The ominous overtones deepen in the second paragraph. Why is this character tired of hiding his/her true nature? Why are they hiding anyway? Is this a world that doesn’t tolerate non-humans? Why do they feel the need to show humans they’re not at the top of the food chain? What did they do to the character to provoke him/her out of hiding?
Hey, more questions and a need to read on to find out the answers.

In SHADOW TOUCH by Marjorie M.Lui we meet our heroine in a strange situation.
Shortly before being shot in the back with a tranquilizer dart and dumped half-dazed on a stretcher, right before being stolen from the hospital by silent men in white coats, Elena Baxter stood at the end of a dying child’s bed, her hand on a small bare foot, and attempted to perform a miracle.
She was good at miracles. She had been practicing them for her entire life, and at twenty-eight years of age, had become quite proficient at the art of doing strange and wonderful things.
I don’t know about you but my mind immediately said, “Hey, what?” when I read the part about being tranquilized and kidnapped. I just had to read on to find out why someone would do that.
Then I discover our heroine is a woman I can like – she’s at a hospital helping a child she doesn’t even know, risking exposure to use her supernatural ability to heal the child. How can we not care for her and worry when we discover she’s been harmed?
What do I do? Read on.

I'll post another in this series next week. Stay tuned! :-)
Posted by Kylie Griffin at 5:45 PM