I first met Rowena May O'Sullivan several years ago at a Romance Writers of New Zealand conference. We were finalists together in the Clendon Award, a full length manuscript contest for unpublished writers.

To my utter delight I discovered we shared a love for paranormal romance, and I was so thrilled when I heard that Crimson Romance was going to publish one of Rowena's PR manuscripts...but I'll let her tell you more about it and the love she has for this genre.

Please welcome Rowena to my blog!

Rowena May O’Sullivan is a writer of paranormal romance and romantic comedy. My first memory of wanting to become a writer was as a child after reading my very first full-length book, Heidi. From there came the Famous Five series. After that it was a wonderful journey as I made my way through all the books on the library shelves, all the while thinking, I’d love to be able write books. At night I would lie in bed with the lights off making up stories and telling them to my sister before drifting off to sleep. Eventually I discovered romance. I love romantic comedy and paranormal romance. I love a great relationship story. I love magic and humor. I love anything quirky. So it only seemed natural to pen these types of books.

One night I dreamed the first book in my paranormal Greenwood Witches series, which eventually became The Silver Rose. From there, The Jade Dragon, Alanna and Gregori’s story was born. I hope you enjoy reading their story as much as I enjoyed writing it. 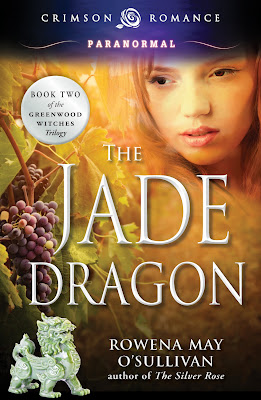 Ensorcelled in a jade dragon, Warlock Gregori has a secret that could destroy his future with the one woman who could save him from turning rogue.
Charged with guarding the jade dragon, Alanna is shocked when Gregori shatters not only the stone imprisoning him, but also the invisible barriers she has placed around herself to hide a secret far greater than his.
A secret that could destroy not only her close relationship with her sisters, but also her life as a witch and most of all, any hope of a future with Gregori.
Sensuality Level: Sensual

Rowena, what is it about the paranormal romance genre that intrigues you the most?
I believe that if the imagination can create something then surely, it exists.  My father read a lot about extra-terrestial visitations and practiced hypnotism in my younger years and this definitely had an influence, but it wasn’t until I took a book out of the library in my early 20’s that I became hooked on reading paranormal books (I don’t think it was called that).  It’s also freeing to write about worlds where the only boundaries are those you create yourself.

What challenges did you face publishing in this genre?
The biggest challenge, apart from actually writing those books, which is not easy – it can be like drawing blood from a stone – is getting a publisher, editor or agent to actually read your work.  They receive thousands of manuscripts from writers the world over and you need to be able to stand out or present the best manuscript you can in order to be read.

A good way, and this worked for me, is to enter competitions.  If you final, you’ll end up on an editor or agent’s desk.  Finalling also gives you confidence. You begin to think, “someone actually liked it enough to mark it high enough to final.”  That in itself provides validation for all those lonely hours sitting at the desk lost in your own world as you piece your story together.

Which authors have inspired you in your own writing? Or which ones do you enjoy reading?
I was inspired very early on. The first book I ever received as a gift was Heidi.  It was the very first full book I ever read.  Then came The Famous Five and that’s when I started trying to write my own adventures when I was approximately eight, nine, ten.

The kernel was born there, but it wasn’t until my son was about seven that I really put pen to paper and wrote a couple of short romances that finalled in Women’s Day competitions and I discovered Romance Writers of New Zealand around the same time.  I attended a meeting and “hey presto” I found a niche where I felt I belonged.

There are so many authors that inspire me that it’s difficult to name anyone as every book I’ve ever read has influenced me in some way.

When you get a chance to relax, what do you like to do?
I often go to see my son, daughter-in-law and wee grandson, who has just turned one, as he learns to swim. Family is the most important thing in my world. Family, friends and reading a really good book!  Heaven!

Five Minutes with Rowena
I do a lot of staring out the window. I love to read, to disappear into other worlds. I wander off mid-thought often! I think life should be more like a musical. Quiet, introspective and yet strangely noisy and annoying. I’m prone to break out into song, even at work. My workmates are ecstatic I only know the first lines of songs.

Fav.must-read author/s: There are too many to mention! Suffice to say I’ll read just about anything.
On my bookshelves at home I have: Jill Barnett, Janet Evanovich, Rachel Gibson, Susan Elizabeth Phillips, Kristan Higgins, Nalini Singh, Kim Harrison, Charlaine Harris, Kylie Griffin and Liann Hearn, plus so many more!

For relaxation you like to: Zone out with a good book or watch television. I love stories! Sleeping on the couch seems to be a favourite as well!

Fav.colour: That amazing colour blue the sky goes at sunset.

Dream holiday destination: Greek Islands – I went there when I was 21 and fell in love.  I’m still waiting to return. Sigh.

Excerpt from THE JADE DRAGON
(Rowena says - This is taken from Chapter Four.  Gregori has just broken free of the Jade Dragon and Alanna doesn’t know what to do with him.)

She spread out a sheet on the cobblestones and rolled him, with a lot of shoving and pulling and pushing, onto it. Then she gathered the ends of the material at one end between her fists and dragged him across the courtyard, kicking shards of jade out of the way with her slippers. Even with the sheet protecting his body, he was sure to have grazes over his behind and legs.
“It’s just as well I lug stone around for a living,” Alanna huffed as she lugged Gregori towards the Gallery. Even more so now that she couldn’t use her powers to levitate an object at will. “You’re a dead weight!” she grunted, finally making it to the French doors. “I don’t know what you did,” she sputtered as she pulled with all her might, taking small backward steps through the Gallery, avoiding precious work by both her sisters and other artists, towards the office. “But I’m not taking any chances. Witches’ Oath be damned! Once you’re out of the cold and I’ve got your privates covered—and they’re the best bits I’ve ever seen—I’m going to get hold of Rosa, Beth, Goran, whoever, and spill the beans big time.”
She could do with some magic right now. She’d conjure up a replica dragon, perch it outside and fix those damned courtyard walls. Those without magic wouldn’t have a clue. Only Rosa, Beth, Aden, and Goran would notice the difference. At least she needed a way to make Gregori invisible while she came up with a plan.
She tugged steadily towards the small office tucked away out of sight where the sisters could rest, make a drink and take care of administrative matters. The daybed had come in handy on many an occasion. Lugging him upstairs was not an option. She had visions of losing hold and of him tumbling down the stairs, head over ass, to lie in a broken heap at the bottom.
“No. Not a good picture,” she mumbled as she heaved a final time into the office. She studied the daybed and then Gregori. “Not going to happen either,” she mumbled and let the sheet drop and Gregori’s head connected with a loud thud on the floor.
Alanna cringed and gnashed her teeth. “Witches’ Warts with knobs on!”
*
Gregori heard muttering. Disgruntled muttering.
“Damn stupid warlock! What the hell did you have to go and do that for?”
“Damn” and “stupid” in the same sentence didn’t sit well in his foggy head. He ought to protest he was neither. He attempted to open his eyes, but they refused to obey. He willed his arm to move. It resisted. He tried to speak. Nothing. Unfortunately, his ears were working. The grunting and swearing continued. If he could talk, he would have been far more explicit in his choice of words, especially the moment his head connected with something hard and unresisting.
“How the hell am I going to explain you to my sisters?”
He likely had a concussion as well as the odd paralysis that prevented him from moving or responding.
“Sorry,” Alanna said. He knew her voice. Her scent.
He would have laughed if he could have. Her apology was belated and only half-hearted. Don’t ever apologize. Never reveal your weaknesses.
A mere bump on the head was the least of his concerns. His physical body wasn’t working, and—he checked momentarily—neither was his magic. Clearly, his mind was intact. He could hear and feel everything that was happening. Not unlike his imprisonment in the dragon. The cynic in him was both amused and irritated. It was fitting, he supposed, that his final prison should take the form of a small, lethal dragon of Marylebone.