On average, romance authors take 5 years and  4.5 manuscripts before they get their first book contract. Despite her willingness to be the exception, journalist KARINA BLISS ended up fitting that statistic almost exactly. En route, she became the first Australasian to win a Golden Heart® from the Romance Writers of America.

Her debut, MR IMPERFECT, was published by Harlequin Superromance in Sept '06 and won a Romantic Book of the Year Award in Australia. Since then she’s written ten books for Harlequin SuperRomance.

Author Facts
Pseudonym or Given Name on the cover? Why a pseudonym?
With a name like Karina Bliss who needs a pseudonym, no one believes it's real anyway.
Location: New Zealand.
Published Genre: Harlequin SuperRomance.
Website: www.karinabliss.com (Karina also has a GoodReads blog)
First published in: 2006.
Number of books published: 10

The Nitty Gritty
List up to 5 significant events in your journey to publication?

What resources/techniques/events did you find useful to develop your writing skills/craft?
I'm a recovering craft book junkie.

The books I keep going back to are: STORY by Robert McKee, WRITING THE BREAKOUT NOVEL by Donald Maass; TECHNIQUES OF THE SELLING WRITER by Dwight Swain, and SAVE THE CAT by Blake Snyder.


Can you share the special moment when you received THE CALL/THE EMAIL?
All I can remember six years on is wishing Victoria Curran would quit with the small talk and get straight to the "We want to buy your book" part!

Funnily enough when she did say those magic words, it still took a couple of days before I really truly beleived it and started celebrating.

Looking back over your writing career, how have you grown as an author?
I think I get better with every book - and worse - which isn't the contradiction it sounds. Craft improves hugely under the guidance of an editor, but it's also a case of the more you know the harder it is to let go through the first draft. Voice is there from the beginning but I also think it evolves and deepens with every book.

How important is it to set career goals? Can you give an example of one you have for yourself?
I have mixed feelings about setting career goals. One, I think they're important, two I think you should always be open to revising them.

The only personal goal that has never changed is to write keepers. Whether I acheive that or not is decided by the reader, the particular story resonating with me as I write it, and lots and lots of fairy dust. But I'd rather fail big than win small.

Can you describe your writing process/timeframe from when you start a new book to handing it in at deadline?
Let's take the last book I turned in as it's fresh - BRING HIM HOME, out June 2012.

I have an initial idea - A guy falls in love with his army buddy's widow. And I push that idea to the nth degree. What if he had to make a Sophy's Choice (lesser of two evils)  in the ambush that killed his buddy? What if his buddy was complicit in that choice? What if he's so scarred emotionally he turns his back on his friends, the only family he has?

What if his best friend's widow forces him to come home because his signature in a family trust is required in order for her sell the home and invest in a business? What if she hasn't forgiven her late husband for something and the hero has to act as go between?

What if his own redemption is increasingly tied to reconciling the widow to her late husband at the same time he falls in love with her?

How will I make a reader believes that this man and no other is the 'one' while still developing an affection for the heroine's late husband?

That's a story evolution that takes a few months to write myself into. And all the time I'm studying facts looking to ground the story in reality which is necessary for SuperRomance. For this book, the SAS, sportsfishing, family trusts and working as a bodyguard were all areas that needed researching. Not to mention how people process grief.

The first draft is torturous. A crawl of four to six pages a day. If I write ten I can guarantee I'll delete five. I'm not a born writer but I'm an excellent reviser :) and I'm totally committed to doing my best work.

What do you enjoy the most in the publishing process?
I love the beginning - coming up with ideas and the end - line edits and AA's when all the hard work is done and you're tweaking.

What do you least in the publishing process?
Everything after page three until three pages to the end.

What's the most memorable fan-mail you've received?
Every reader email is special. I still find it wondrous that strangers  read my books.

Is there anything you think pre-publishers writers need to know about the business/industry before they're published?
The quality of the book is the only thing you really have control over. Know what you want out of being published - fame, fortune, critical acclaim and keep that as your touchstone when you're making decisions that affect your career. 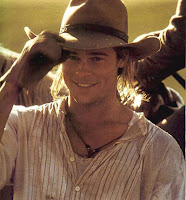 A Bit of Fun
Favorite color: Money.
Hunkiest hero ever: Brad Pitt in Legends of the Fall. (And then he cut his hair and I went off him...so shallow).
Most daring thing you've done in your life: I was a broke Kiwi travelling through the States and ran out of money. I slept on a friend's floor for a month, working in a card shop, until I could fly home. That friend lived in a frat house at Stanford University where he was studying! I was little sister to thirty guys. An amazing experience, Animal House meets The Sound of Music.
Greatest love: My husband and son.
Timeout/relaxation for me includes: Reading on an exercycle. I'm magically getting fitter while I'm lost in a book.
Special quote/saying you like: "I can't stand Willy Wet Leg, can't stand him at any price. He's resigned and when you hit him, he lets  you hit him twice." - D. H. Lawrence. It just makes me laugh.
Posted by Kylie Griffin at 1:00 AM