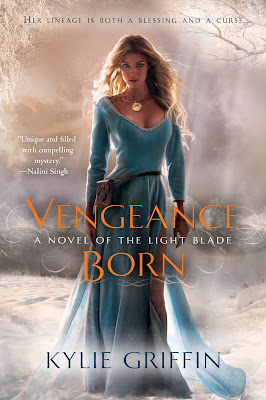 Happy Release Day,
VENGEANCE BORN!
There is no mercy in the demon realm. No escape. In this place of desperation and conflict, anyone who is not pure bred is virtually powerless. Until an unlikely champion is born…
Annika, half-blood daughter of the Na’Reish King, longs for more than her tormented life among her father’s people. Conceived in hatred and bred as a tool of retribution, she’s gifted with a special talent that can heal as well as destroy.

With the Na’Reish vastly outnumbering them, Kalan, a Light Blade warrior, knows the future of humankind depends on him alone. Incursions into human territory and raids for blood-slaves by the Na’Reish Horde have increased. As Chosen-leader, he faces the task of stopping the demons—and convincing the Council of aging Light Blade warriors that change is necessary for survival.

When Annika learns Kalan is a prisoner in her father’s dungeon, her dream of escape seems within reach. She agrees to free him in exchange for his protection once they reach human territory. Now, marked for death for helping him, Annika must learn to trust Kalan as they face not only the perilous journey to the border but enemies within the Council—and discover a shocking truth that could throw the human race into civil war…

“Vengeance Born is a great debut novel; Kylie Griffin has me hooked... It's not only good on the first read, it's still good on the second; this is definitely one for my keeper shelves.” – Jean Johnson, author of the Sons of Destiny series

"Kylie Griffin builds a compelling and fascinating world that pulled me right in!" – Joss Ware, author of the Envy Chronicles

"Enter a bold new series, the Light Blade, where a longstanding war between the demon and human realms rages. Promising new talent Griffin’s characters face danger and hidden secrets that threaten to change the world as they know it. A terrific debut!" – Romantic Times Magazine
Posted by Kylie Griffin at 1:00 AM