Edie has been kidnapped by renegade mercenaries for her bio-tech skills. Her compliance is ensured when she's mentally leashed to her bodyguard - if she leaves his side he dies and if she doesn't give the mercenaries what they want, they both die.

Edie tests the mental link they share in the hope of breaking it...


A single pure chord diengaged itself from the rest. Edie grabbed it and traced its source, certain she was doing the wrong thing, but it was all she had. Her interface kept the chord separated, but the cacophony surrounding it obliterated its path. A hard vacuum of silence cut through the link for an instant, and then a warning glyph screamed.
Finn knew there was a problem at the same moment she did.
"Back off," he hissed.
With a gasp, she dumped the chord and let his splinter kick her out. She pulled her hand away, opened her eyes to state into his, into the dark gold flecks radiating across the irises. For a long moment she couldn't speak. She had to make herself breathe again. Staggering to her feet, she felt like she should apologise but didn't know how he'd take it.
Instead, she stuck to technicalities. "They've injected biocyph into your cerebral cortex."
His eyes widened. "Biocyph? In my head?"
"Just a single strand. But it can't be removed or interfered with, or the little bomb in your skull will go off. I don't know what to do." 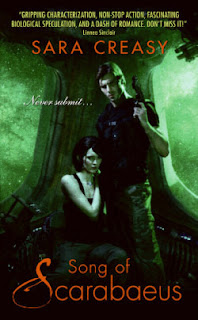 SONG OF SCARABAEUS
Trained since childhood in advanced biocyph seed technology by the all-powerful Crib empire, Edie's mission is to terraform alien worlds while her masters bleed the outlawed Fringe populations dry. When renegade mercenaries kidnap Edie, she's not entirely sure it's a bad thing . . . until they leash her to a bodyguard, Finn—a former freedom fighter-turned-slave, beaten down but never broken. If Edie strays from Finn's side, he dies. If she doesn't cooperate, the pirates will kill them both.
But Edie's abilities far surpass anything her enemies imagine. And now, with Finn as her only ally as the merciless Crib closes in, she'll have to prove it or die on the site of her only failure...a world called Scarabaeus.