The Dark Side DownUnder series continues this month. I invited you to get to know some paranormal romance authors from Australia & New Zealand, maybe find a couple of new-to-you-authors & reads!

My good friend, Erica Hayes is the Dark Sider in the hot seat today!

Erica Hayes is an Aussie author of dark fantasy and paranormal romance, currently living in England, where at least the beer and the hospitality, if not the weather, is warm.

She was a law student, an air force officer, an editorial assistant and a musician. Her books feature tough, smart heroines and colourful heroes with dark secrets.


Growing up, did you have an interest in the paranormal, Erica?
I used to scare myself stupid with books from the library about vampires and monsters and being buried alive, bwahaha...It was all ‘horror’ back in those days, not a romantic vampire among them.

There wasn’t much TV in our house, but I used to watch Doctor Who (the Tom Baker and Peter Davidson versions!) when I got home from school.

(Kylie's comment: For those unfamiliar with the awesomely popular British TV series, you can find out more about it here.)

Erica, what drew you to write in the paranormal romance genre?
I like monsters. And sex and violence. So paranormal romance is perfect! I dunno, I can’t seem to come up with a plot that doesn’t feature some kind of made-up element, whether it be magical or sci-fi.

In your books, what sorts of characters or themes do you like to write about?
Oh, the ‘core story’ question, ooga booga :) Mine, apparently, is ‘the darkness within’. Always something to do with people who lead a double life somehow. Everyone has two faces.

No one is what they seem, or who they pretend to be, or even who they’d like to be. They have a dark side that pulls them in conflicting directions, and because it’s paranormal, usually that dark side comes to life!

My heroine Jade in SHADOWFAE is possessed by  a demon fragment called ‘rapture’. The hero in SHADOWGLASS has a split personality. The heroine in DRAGONFLY, Carrie, is a deep cover agent pretending to be someone else, who’s pretending to be yet another someone.

Fav. paranormal TV series: probably Supernatural. I give everything that comes on a go! I even watched The Vampire Diaries for a while (seriously? How many times can we have the same plot?) and I got through season 3 of True Blood before it jumped the shark for me.

But I always seem to return to Supernatural... and the answer is Sam. In case you were wondering.

Which paranormal romance author would you just love to meet in person? They tend to hang out at conferences, so it isn’t that hard...  Mary Shelley, author of Frankenstein? She’s not likely to turn up at the next RWA. Not exactly a HEA in that one, but still...

Most intriguing paranormal creature: I like my vampires, yes I do. And I’ve had great fun with angels in my Seven Signs series. I’ve also done djinni, fairies, shapeshifters, demons, zombies, superheroes...

Not much of a fan of werewolves, to be honest, but for me the most intriguing paranormal creature is one who leads that double life I was talking about – one thing by day, and another by night.

Keeper paranormal romance series/books: I’ve got lots. I don’t give away many books! And there are so many good ones. Some that I’m currently enjoying include Linda Poitevin’s Sins of the Angels, and the Hearts and Thrones series by Amy Raby.


Which would you prefer - transporter, TARDIS or immortality: Well, if you had a TARDIS, a transporter would be redundant.

Immortality... Well, you’ve heard the stories. Too much fine print.

So I guess I’d opt for the TARDIS. Does it come with the Doctor?


Check out Erica's latest release & her other books:

Jewel is a djinni of the lamp, an enchanted slave, bound to her owner by dark magical cravings she can't resist. She burns for freedom, and when her lamp is stolen—by Tam, a hot and dirty bad-boy thief—she vows to be rid of her new master at any cost. Even as she plots Tam's demise, the lamp's dark fascination makes her long to claim him as her own.
But the last thing Tam wants is a spellbound djinni who can't say 'no'. Cursed by a demon to suffer living death, he's tormented by undead longing for pain, pleasure, any sensation he can get. To have this exquisite, besotted Jewel at his bidding is pure torture… because Tam refuses to succumb to her magical allure.
Not when he knows she can't truly be attracted to an ever-dying freak. And not when he’s already on a mission from his cruel demon master: capture and deliver one djinni... 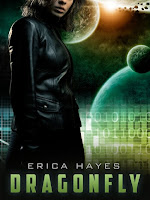