Apart from her family and friends, Jess Dee loves two things: romance and food. Is it any wonder she specializes in dee-liciously sexy romance? Jess loves hearing from readers. You can email her at jess@jessdee.com or find her at www.jessdee.com

Heroine bio: Melissa Sparks has one goal: Success. Whatever she undertakes, she has to be the best. The humiliation of previous experience has taught her failure is not an option. Nothing interferes with her drive to make partner. Nothing. Except maybe her physical craving to sample work colleague, Ben Cowley.

Hero bio: Since arriving in Sydney, Ben Cowley has  indulged in some pretty debauched behavior. It’s his way of sorting through the pain and heartache of a broken relationship.

Ben works as an investment banker at Preston Elks. He’s motivated, goal oriented and determined. The last thing this lonely business executive expects to find in his office is his too-serious, straight-laced and unexpectedly-sexy coworker stripping naked…for him.

Interesting feature/s of this book: This book features two damaged characters struggling to find their way back to happiness. Their journey begins in the form of a very hot, very explicit, very unexpected sexual encounter at the office.
But what starts as a simple fling quickly spirals into an emotional story of love, commitment and healing. 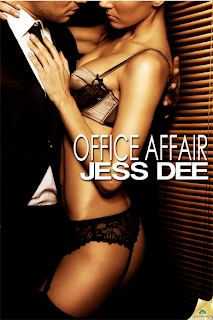 All work and no play? Not for this girl. Not anymore.
Melissa Sparks has had enough. Enough of being the high achiever, enough of ignoring her social life in favor of her job and enough of being lonely. Just this once she wants a change. Something different. Something that looks very much like her business associate, Ben Cowley.
Ben Cowley is all alone in the deserted offices of Preston Elks. He’s gorgeous, he’s single and he’s been her secret fantasy for the last two years. It’s a split-second decision, but there’s no going back.
When Ben looks up from his desk, the last thing he expects to see is his too-serious, straight-laced colleague stripping naked. It’s been a year since his last relationship ended, and though he’s still picking up the pieces, Melissa throws his carefully balanced world off its axis. So does her offer: a brief affair, no strings attached.
Right about the time he realizes a simple affair will never be enough, she’s back in professional mode—and clearly as distant as ever. Now it’s up to him to show her that what they have is no fluke…and he’ll do whatever it takes to convince her. Even if it means inviting another man into their bed.

Warning: This book contains a man haunted by his past decisions, a woman determined to succeed, sex hot enough to steam up every office window on the block, and a voyeur who gets off watching those windows steam up.
Posted by Kylie Griffin at 1:00 AM