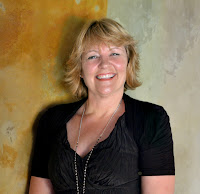 Wendy Vella is a lover of all things romantic. She started reading her first Georgette Heyer book at a young age and instantly fell in love with the Regency era. Writing is something she has always found time for; she penned her first novel at eighteen though she says it will never make an appearance further than the closet in which it currently resides.

After having her two children Wendy then joined RWNZ and started honing her chosen craft by entering competitions with some success and attending conferences. Her Clendon and Readers Choice award-winning historical romance The Reluctant Countess will debut in Jan 2013 with Random House in their Loveswept line.

She has an addiction to reading and loves a wide range of genres while her first love will always be historical. She relishes novels steeped in Romance and excitement with feisty heroines and delicious heroes, especially when they are set amongst the treacherous waters of London society.

Wendy is a sucker for a happy ending having secured her own. She has been married to her own dark brooding hero for 28 years and shares her home with two wonderful children, two dogs and anyone else who happens to be visiting at the time. Born and raised in a rural area in the North Island of New Zealand, Wendy loves the beaches and lush green rolling hills of her homeland and is proud to call herself a very patriotic Kiwi!

Title - THE RELUCTANT COUNTESS
Released - January 2013.
Publisher - Random House – Loveswept.
Call Story – I was lucky enough to meet my editor Sue Grimshaw at the Auckland RWNZ conference in 2011. I pitched The Reluctant Countess to her and she asked me to send her the first three chapters, which she loved, and then she requested the full manuscript.

I received her acceptance by email. It was a Saturday morning and I remember opening the email with a pounding heart, and then just sitting there looking at the screen completely shocked after I’d read it. I screamed and laughed and my family came running. I then called a few friends and several champagnes later I was much more relaxed!

About your book:
THE RELUCTANT COUNTESS is set amongst the intrigues and scandals of Regency London. 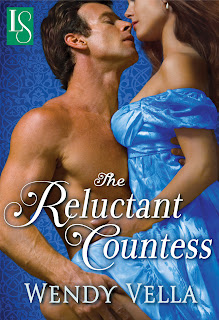 From rising romance star Wendy Vella comes a Cinderella story of whirlwind passion between a dashing earl and a beautiful countess—and the secret that threatens to tear them apart.
Regal, poised, and elegant, Sophie, Countess of Monmouth, is everything that a highborn lady should be. But Sophie is hiding a past that is far from royal. When Patrick, Earl of Coulter, realizes that her story doesn’t add up, he resolves to find out the truth of what Sophie and her sister-in-law are concealing. Although Sophie has every reason to avoid him, the handsome and charismatic Patrick awakens something wicked deep within her soul . . . a powerful need that Sophie must stifle in order to protect her place in society.  Despite Sophie’s humble background, the raven-haired beauty has won Patrick’s heart. But what Sophie needs now is an ally. Viscount Myles Dumbly, the disgruntled former heir of Monmouth, is determined to expose Sophie as a fraud to recapture his lost inheritance. Soon Patrick is drawn into a fight for both their lives. Somehow he must find a way not only to rescue Sophie from poverty once and for all, but to keep her in his arms forever.

THE RELUCTANT COUNTESS excerpt
“If only she had a small imperfection.”
“What?” Patrick, Earl of Coulter, tore his eyes from the top of the stairs to glare at his friend.
“The countess.” Lord Sumner swept his hand in an arc that encompassed most of the assembled guests. “I was saying that some sort of imperfection would detract from her goddess like beauty. Perhaps a lisp? Alas, no,” he added seconds later. “A lisp would merely make her sweet and beautiful.”
“Idiot,” the earl muttered, propping one shoulder against the silk-covered wall. His gaze returned to where the countess now stood. Poised on the top step of the Duke of Rookvale’s ballroom, she appeared motionless; only her eyes moved as they passed over the guests milling below.
“Perhaps a mole with several long dark hairs,” Lord Sumner mused, “on the end of her little nose?”
Patrick watched the countess descend. Tonight her raven locks were piled high and clasped with a single diamond pin; several long curls had been artfully teased to lie on one slender shoulder. Created to torment, her dress was cut low in the bodice, allowing a glimpse of the lush curves that lay beneath, and with every step she took the skirts caressed her legs in a swirl of emerald satin. Patrick dreamt about those legs—naked and wrapped around his body. Even from a distance, his muscles clenched at the thought of her lying beneath him, skin gleaming, lips red from his kisses. Bloody woman. From the first glance, she had taken up residence in his head, and he wanted her out. Patrick didn’t obsess over women—he took what he wanted when he wanted it. Usually his affairs were brief yet satisfactory for both parties and he was always the one in control. The countess, however, was another matter. Something about her reached out to him and he wanted her with a desperation no other had made him feel. Yet he would never act on that desperation because the countess was a fraud, and there was nothing Patrick hated more than people who set out to deliberately deceive others.
“Did you just growl, Coulter?”
“Don’t be ridiculous!” Patrick snapped, following the countess’s progress until she reached the bottom step. Once again she became motionless. It was as if she held her breath, yet those eyes moved in every direction, seeking, searching, but for what?
“To be her lady’s maid for just one day,” Lord Sumner sighed.