Having completed a diploma in Proofreading, Editing and Publishing through the Australian College QED, Bondi, NSW, Juanita is a freelance editor and proofreads scientific text books for Elsevier Press, Oxford, UK.

August 2012 saw Juanita's debut release find a home on the virtual bookshelves. FLY AWAY PETA from Eternal Press is a contemporary romance with elements of suspense and intrigue, set in the rural Western Australian town of Williams.

Juanita's second novel UNDER THE HOOD will be released by Escape Publishing in March 2013. This is the story of two people struggling to save a group of teens from the dangers of life on the streets and doing their best not to fall in love. UNDER THE HOOD is set in the semi-rural Perth Hills, the perfect place for growing second chances.

Juanita escapes the real world by reading and writing romantic fiction. When she’s not writing, editing or proofreading, Juanita is the cleaning fairy and mother to three boys (hubby included, his toys are just a little more expensive). Her not-so-miniature Daschund, Sam is her critique partner and keeps her company while writing.

Call Story – When FLY AWAY PETA was accepted for publishing by Eternal Press last year, I didn’t think my publishing dream could get any better. So when I submitted to Harlequin’s new Escape Publishing digital first line, the last thing I expected to become was an Escape Artist.

When I got the email in November last year to say UNDER THE HOOD (working title Taming the Tiger) was accepted for publishing by Escape, I was over the moon. I am now proud to be part of a wonderful group of pioneers for the Harlequin brand.

About your book:
Hero – Scott Devin
When Scott Devin buys a struggling car dealership in a semi-rural area in Western Australia, the last person he expects to see in charge is a stilletto-wearing, mini-skirted foreperson. Exactly the distraction a struggling, male-dominated workshop doesn’t need! But there’s more to TJ Stevens than meets the eye.

Heroine – TJ Stevens
TJ Stevens has two major goals in life: to preserve her grandfather’s heritage and protect the program – and she’ll go to any lengths to do it. Scott Devin’s presence is a threat to everything she’s worked hard to achieve, so keeping him at arms-length shouldn’t be a problem…or could it?

Australian businessman and politician J.J. Simons founded the Young Australia League and established a holiday camp deep in the shaded Roleystone valley in 1929.

The Grove of the Unforgotten, still remains today, built in memory of Young Australia League members killed in World War I.

Now known as Araluen Botanical Park, this has to be the most peaceful garden in Western Australia. Many of the cottages have been restored, except for one that burnt down, leaving only the chimney stack standing.

I chose a similar setting for TJ & Scott’s story, because of its history and original purpose. How wonderful would it be if young people could return to this peaceful place while they search for themselves through the trials of growing up?

Unfortunately my story is fiction and TJ is sadly no relation to J. J. Simons but his dream and my love for his creation provided the perfect background for this story of an extraordinary woman who has her own dream and a commitment that knows no boundaries. I hope you enjoy the story. 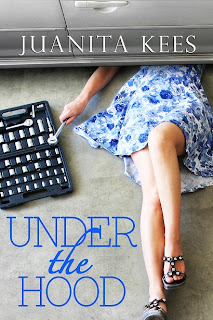 UNDER THE HOOD excerpt
The connecting door back into the reception didn’t budge as she shoved against it with her bottom and simultaneously tried to secure her wayward hair in a rubber band.
“Ouch,” she muttered just as it gave way and two firm hands grasped her shoulders. The hands spun her around firmly. She looked up. A long way up. The muscular frame of her impatient visitor blocked the doorway.
“Tiffany-Jane Stevens?” His voice reverberated through her, deep and rumbling. Not unlike thunder —which matched the expression on his face.
She shivered. “Yes?”
“Scott Devin. Tie your damn shoes, take off that ridiculous skirt and meet me in my office.” With that, he spun around and stalked off.
TJ stared at his departing back with a sinking feeling in her stomach. Scott Devin. Her new boss. He was a week early. It was definitely going to be a bad day.

Any upcoming releases?
My alter ego, Seanna Smythe, has a short story in the Edible Delights Anthology volume 2 which will be released by Secret Cravings Publishing in July. It’s a little spicier and about as hot as chilli ice cream!