Call Story - I do lots of volunteer work for Romance Writers of Australia (RWA).  I was talking to the lovely Sarah Fairhall from Penguin about their sponsorship of the 2012 RWA Gold Coast conference. She casually asked me what type of stories I wrote.  I told her category romance.

She asked “Do you have anything you could send me?” I said, “Penguin don’t publish category romance.” (Yes, perhaps it would have been better to just say yes!) What I didn’t know then was Penguin was in the process of developing Destiny Romance, their new digital-first romance imprint.

I sent her The Convenient Bride and from there, everything happened so fast. Sarah came back to me in about a week saying she loved the story and I ended up being one of the launch authors for Destiny.  All very exciting!!

About your book:
Hero – Damon Fullbright – hot sexy lawyer with tragic past.
Heroine – Felicity Carter – feisty law graduate with a secret life or death mission.
Setting – THE LOVE DECEPTION is set in Melbourne and the exotic island of Barbados. 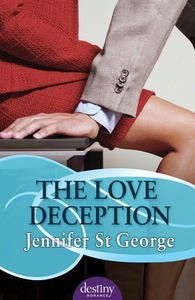 THE LOVE DECEPTION excerpt
Felicity slammed into something hard. Something warm. Something . . . Damon’s chest. She jumped back, as if scalded.
‘At it again?’ A scornful smile marred his otherwise annoyingly perfect face.
‘At what?’ She snapped on her professional mask.
‘We’ve not been alone for a minute and you’ve already got your hands all over me.’ He folded his arms slowly, deliberately, knowingly.
Her eyes swelled. Her jaw tightened. Her fury soared.
‘In your dreams.’ She tried to edge past him to the safety of reception. His body blocked her path.
Damon opened a side door. He put his hand on the small of her back and ushered her into a tiny meeting room. The transfer from the corridor to the room was executed so quickly that she didn’t have a chance to react. Felicity swung around to face him. The door closed with an ill-omened clunk.
Imprisoned again.
‘Don’t you dare touch me.’ She backed around the table.
‘You’re kidding, right?’ He leant against the wall as though the world owed him a confetti parade. ‘Felicity, there’s something you need to understand. We have an extremely strict code of conduct. You clearly have a drug and alcohol problem, and this is not a rehab centre.’
Her pulse kicked up as though she’d just had a line of crystal meth. She blinked stupidly. Drugs? Alcohol? The words swirled like a fancy lime cocktail. What in God’s name was he talking about? Sure, she liked a chilled chardonnay once in a while, but drugs?
She searched frantically in her mind for missing details of that night. The lack of factual evidence made it impossible to mount a credible defence.
‘I don’t use drugs.’ The words sounded lame and strangely well rehearsed, as though she’d practised them over and over for some small role in a television pilot.
‘All evidence to the contrary. I’ll give you this, you’re the first scholarship-winning addict I’ve met.’
Addict?
‘Your qualifications got you over the line today, but one false step and you are out. Don’t even think of bringing your problems to the office, they won’t be tolerated.’
‘You have me all wrong. That night—’
He placed his palms on the table and loomed across the small distance between them.
The tang of his minty citrus aftershave compounded the confusion hurtling through her mind. She tried not to react to his obvious attempt to intimidate her, but took an involuntary shuffle back.
‘Don’t even try it with me. I know all the tricks,’ he said.
Her brow furrowed with what felt like as many lines as your average affidavit. Tricks?
‘I’ll be watching you.’
She squared up. Bloody hypocrite. ‘Professional conduct?’ she laced her voice with a heavy note of scorn. ‘What about you?’ Take that. She enjoyed planting triumph on her own face.
His face twisted with shock.
‘Me?’ He pushed off the table with such force that wood creaked and the metal legs shuddered. ‘What would you have preferred I do? Explain exactly how I knew you? What you did? I don’t think that would have done either of us any good.’

Any upcoming releases? I’m working on a story about two characters from completely different worlds. The hero is an IT guru working in central London and she runs a wildlife sanctuary in Brunei. Having them find anything in common is proving difficult. It creates fabulous conflict. I’ve already cried a couple times while writing their story, so I hope I’m conveying this emotion on the page.