My heart aches every time I hear an update about the devastating floods in Australia at the moment.

As a member of the volunteer NSW State Emergency Service, I've seen the damage and devastation storms and floods can reek on homes and communities. Losing a home or worse, a loved one, in a tragedy such as a flood, flash flood or drowning affects me the most. Sure, the physical cost of a disaster is staggering but it's the human cost that lives on in memory for years to come.

This morning I read 75% of the state of Queensland has been declared a disaster zone. The Northern Territory, New South Wales, Victoria and South Australia have all been hit by flooding in the last few weeks or are in flood now. Entire towns, villages and communities have been isolated, inundated or are experiencing the worst floods in 50 (and in some cases 100) years.

The only states not flood declared are Tasmania (although they're on flood alert with heavy deluges expected today) and Western Australia (they're in drought and are suffering bushfires!).

The flooding in Queensland alone has affected over 20 cities and towns and 200,000 people, and 38 local council regions have been declared disaster zones.*

The cost to the national economy so far is estimated at $6 billion, with agriculture and mining at the top of that list, and this value will rise as the clean-up and long term affects on communities are counted.*

For anyone reading this from overseas, I've included a couple of maps to give you an idea of the scale of the flooding. There's one with the USA superimposed over Australia and another with Europe. 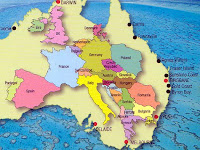 There's also a map of Australia (various colours) that show the rainfall we've had. Using that as an estimate, look at the light green, green, light blue, dark blue and purple areas on it and you can pretty much say that's all land affected by flooding. Now compare that land mass to your superimposed images of the USA or Europe. Staggering, isn't it?

The news can be a double edged sword - you see or read the good, bad and ugly of the disaster. The generosity of people helping out (not just those in paid jobs), the homes and livelihoods lost, the toll on whole communities (and this case the whole country), the deaths, and the lower-than-scum looters.


But the most heartening aspect, and something I hold onto each day when I switch on the TV to watch the news? The way Aussies pull together to support each other.

Volunteer and government services are working around the clock to provide rescue, evacuation, essential supply drops or emergency accommodation. People are opening their homes to evacuees or people stranded because they can't get home.

And we can't forget the Flood Relief Appeal. While people may not be able to help physically, many have contributed financially.

To date, nearly $33 million has been raised. And this doesn't count the aid (eg.emergency service manpower) we've been offered from overseas countries like New Zealand and the USA.

When times get tough the outpouring of support and help is overwhelming and certainly brings a tear to your eye.


My Country
(by Dorothea McKellar)
(partial poem, verses selected)
I love a sunburnt country,
A land of sweeping plains,
Of ragged mountain ranges,
Of droughts and flooding rains.
I love her far horizons,
I love her jewel-sea,
Her beauty and her terror -
The wide brown land for me!
Core of my heart, my country!
Her pitiless blue sky,
When sick at heart, around us,
We see the cattle die -
But then the grey clouds gather,
And we can bless again
The drumming of an army,
The steady, soaking rain.
An opal-hearted country,
A wilful, lavish land -
All you who have not loved her,
You will not understand -
Though earth holds many splendours,
Wherever I may die,
I know to what brown country
My homing thoughts will fly.
* Figures, maps & some images from the internet article titled Queensland Floods, and the Australian Bureau of Meteorology site.
* SES photos from a variety of sources such as the NSW SES website (home site & individual units - Gundagai & Warringah) & The Australian newspaper.
* Poem by Dorothea McKellar taken from a website dedicated to the Australian poet.
Posted by Kylie Griffin at 10:35 AM