I had the pleasure of contacting Joss Ware via a "fan girl" email when I discovered The Envy Chronicles, her post-apocalyptic romance series.

That first email eventuated into a guest spot here on my blog back in June 2010. Then in July last year at the RWA® Nationals in Orlando, Florida, I had the pleasure of meeting her in person at the Literacy Signing event.

Hi Joss, welcome back to my blog!

It’s an exciting time for you at the moment as your next book in The Envy Chronicles, NIGHT BETRAYED, hits shelves this week.

Let’s start with an easy question
Joss is an uber-sexy, gritty, edgy, in-your-face blonde bombshell with a PhD who consistently puts off Brad Pitt, George Clooney, Johnny Depp and Clive Owen--because a gal needs her beauty sleep. But she always has time for Robert Downey, Jr....

Sort of like...Walking Dead or LOST meets Suzanne Brockmann. With a bit of paranormal woven in.

Ahh, a panster and a lady after my own heart! That must make plot arcs a very interesting process for you. So, with that in mind, is it your characters or your plot that influence you most? What's your writing process from start to finish when writing a book?
There are three things that influence me, pretty much equally: character, plot and setting, or world. They all work together to make what is just as much an adventure for me as it is, hopefully, for the reader.

I generally maul a work to pieces as I'm writing it, going back and forth and editing and tweaking and so on as I write. I tend to be unable to go far forward without making changes that I know need to be made. That means, though, that when I'm done with the book and type THE END...I'm pretty much done.

Yay! Wow, we have such a similar process it's scary, Joss. 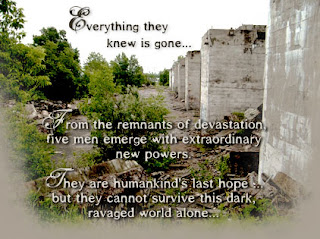 For those who haven’t yet discovered The Envy Chronicles could you give a brief overview of what this series is about?
The series is set fifty years after a series of apocalyptic, deeply catastrophic events decimate the earth and destroy most of the human population. There are five men who emerge from a cave in Sedona to find out that everything's changed--they don't really know how they "missed" the apocalypse, but they did.

Now they have to find their way, to figure out how to live, in this new world. And each of them emerges from the cave somehow altered (that's where the paranormal aspect comes in).

The world is like the environment in LIFE AFTER PEOPLE, or WALKING DEAD. There's a feel of LOST in the series, as well as HEROES. The guys are edgy and sexy, like a Suzanne Brockmann Troubleshooter. And...there are zombies.

I saw LIFE AFTER PEOPLE before I started reading your series and it was one of the first shows I thought about when I did, only your books were a lot creepier with the ganga's. They give me the heebie-jeebies!!! LOL
Now, we’re all eagerly awaiting NIGHT BETRAYED. Can you tell us a little bit about Theo’s story?
Theo's story was heavily influenced by a book I read that was by a hospice doctor. He wrote about some of his experiences with death and the dying...the things he witnessed and experienced as people moved from a corporal life here on earth into the next plane...whatever it is. It fascinated me, and I decided that I wanted to explore that a bit in one of my books.

I settled on this book because, first of all, at the end of the previous book, Theo has been fatally shot. And secondly, I wanted the heroine of NIGHT BETRAYED to be special in her own right. She, as it turns out, was born during the Change (the apocalyptic events) and she has her own skills and callings...just as Theo does.

What was the easiest and hardest parts about writing this book?
I had a lot of fun with the fact that Theo, who's in reality about 80 years old, but looks 30, is matched up with Selena, who is a very fit, healthy, young-looking 50 year old. When she meets Theo, thinks he's way too young for her. ;-) Plus she's the mother of a teen-aged son. That gave me a lot of things to play with.

I also wanted to explore the lure/legend of the zombies in my world, and in this book the reader learns a lot about those horrible creatures.

Hmm, maybe I'll be reading this book during daylight hours only. AND with all the lights on!
When can we anticipate the next installment in The Envy Chronicles? Can you give any hints about whose story is next in the series?
The next installment in The Envy Chronicles is Fence's story. He's the guy who's always making bad jokes and puns, doesn't seem to have a serious bone in his body....but that couldn't be farther from the truth. It turns out Fence has a deep, dark secret that he's not telling anyone....until he meets a woman who forces him to face it.

NIGHT FORBIDDEN will be out in September!

Woohoo, another book this year! Can't wait!
Joss, it's been fun having you here and I look forward to read NIGHT BETRAYED!
Thanks so much, Kylie! I really appreciate being here. I'm happy to answer any questions from readers or commenters!


Joss's books in The Envy Chronicles: