Who's that girl? Interview - Jess Anastasi

Another southerner graces us with her presence today - no, not from the USA, but from one of the southern states of Australia!

Where are you? Central Victoria, Australia.

How many years have you been a member of RWOz? Around 7? I think. I can't actually remember which year I joined, LOL.

What genre/s do you write? The question is, what genre haven't I tried to write?

I started out wanting to be a regency author, then I moved onto paranormal romance, then tried my hand at romantic suspense, then had another go at paranormal and finally ended up writing sci-fi romance, kind of.

Who are your favourite authors? Suznanne Brockmann, easily my fav. I used to like Sherrilyn Kenyon, but her Dark-Hunter/Dream-Hunter/Were-Hunter series just confused me in the end, so I gave up after I read ACHERON.

I LOVE Linnea Sinclair, she is brilliant. Also, JR Ward's Blackdagger Brotherhood series is awesome...I could go on, but we'd end up here all day.

What inspired you to write romance? The first romance I ever read was one by Judy Garwood, HONOR'S SPLENDOR. I already had some idea I wanted to be a writer, but after I started reading romances, I knew it was what I had to do. I just loved the exploring the developing relationships and complexities of people in love.

Who's your dream agent and/or dream publisher? Jessica Faust (from BookEnds LLC) is my number one dream agent, I've been stalking (ahem, I mean following at an entirely sane distance) her for years, but no luck yet.

I'm not fussy, I'LL TAKE ANYONE! No, I'm not that desperate. I really would like to have an agent though (hear that, agent-gods, I'm praying really hard here!). As for a dream publisher, I'm not as specific. I'd just like to have something contracted with one of the major publishing houses.

What's the best thing about going to conference? I don't know, I haven't made one yet! I fully plan to get to Melbourne 2011, though. I imagine there are lots of great, fun things about going to a conference. No kids. No husband. Cocktails...what? Oh, you mean in terms of writing. Well, I'm sure the workshops and stuff are good...

And lastly, finish these statements...
My greatest strength as a writer is...ergh, really? Um, OK, I'll say I don't really do a first 'rough' draft. I tend to edit heavily as I go, because I hate the idea of facing an entire manuscript worth of editing all at once. So I like to get it as close to polished while I'm writing it, so it only needs basic adjustments at the end.
A sexy hero needs...to be totally ripped, intelligent and caring at heart, but tough on the outside. And maybe be in possession of a really big gun...now you're asking yourself which way I intended that 'big gun' bit, aren't you? I'll leave it up to your imagination!
My latest WIP (work in progress) is about...SEVERANCE, the second book in the Sanctuary series, Alastor and Nakita's story.
When I write I like to...EAT! Seriously, every time I sit down at the computer, I get a major case of the munchies. In fact, I'm eating while I write this. I don't know how I don't weigh like 100kg.
My best writing milestone to date is...getting published! Easily best. No, maybe getting my first book cover was. I don't know, it's all pretty good really!

Jess, it's been great having you here!
Thanks, Kylie.


SEVERANCE (Book 2 in the Sanctuary series) is available on February 14th, 2011 from Noble Romance Publishing. 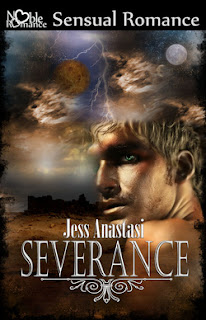 Nakita Branson made a deal with a demon to rescue her best friend. But when things don't go the demon's way, he dumps her off on a derelict spacestation with no money and no way of getting home.

A year later, Nakita is still searching for her friend, but finds trouble instead. And the only thing worse than the possibility of getting killed by a fanatical jerk? A familiar green-eyed demon turning up just in time to save her.

Alastor is back with news that the contract they agreed to is still intact and until he can find a way to break it, he is compelled to protect her.

The last thing Nakita wants to do is go anywhere with the demon who has a history of screwing her over. Not only that, but when he looks at her with that emerald gaze, intense enough to burn, she feels something she shouldn't for the gorgeous demon.

With the demon monarchy in chaos and enemies all over the universe, they are forced to rely on each other while unraveling the mystery of two sacred relics, and the contract that still binds them.
But, by the time Alastor and Nakita find a way to sever their deal, the idea of being apart may no longer be what either of them wants.


For a sneak peak at an excerpt from SEVERANCE click here.
Jess's other books:

Click here to read the blurb and excerpt for DEAD REALITY.


Click here to read the blurb and excerpt for SANCTUARY (Book 1 in the Sanctuary series).

For more information about Jess, check out her website or her blog.
Posted by Kylie Griffin at 1:00 AM